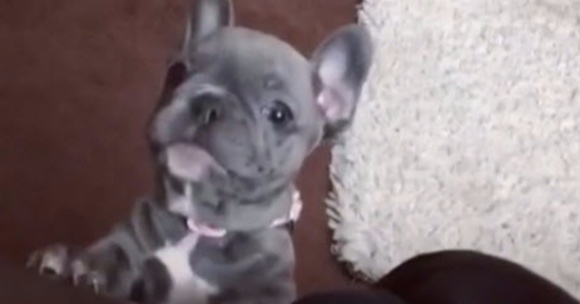 When we want to get somebody’s attention, we usually do so by calling out their name or calling them in some way or another. It works very effectively, so it is something we use throughout our lifetime. It is not only humans that vocalize when they want to get somebody’s attention, dogs do it as well. Since the time they were little puppies, they learn how to bark in order to get the attention of those who care for them in some way or another.

This little puppy seems to have the right idea, but the way she is doing it is so adorable I can hardly stand it. Her name is Honey, and she is speaking to her human who is sitting on the couch. I’m not quite sure what she is saying, but it seems as if she is asking for help but the sounds coming out of her mouth are nothing like what I would’ve expected.

Each individual has a unique voice. In some cases, that voice may be so distinguishable from others that we could recognize it the moment we hear it. I believe this puppy has a similar bark.